When NBA superstar Michael Jordan bought his estate in 1991, it was a groundbreaking purchase that shocked the world of celebrity real estate. Located just outside of Chicago, Legend Point was massive - 56,000 square feet, to be exact. It's a mega-mansion with nine bedrooms, five fireplaces, a putting green, a tennis court, a regulation basketball court, and much, much more. It seems like the type of crib that any celeb house hunting in Chicago would lose their minds over. This jaw-dropping estate should be easy to hawk, right?

Two decades later, Jordan has had quite the uphill struggle trying to sell his prized palace. Originally listed for $29 million, the price was later dropped to $21 million, and then sent to auction without any result. And then...this video happened:

Beverly Hills agent Kofi Nartey's strategy is a little heavy-handed, to say the least. (Cue dramatic music and intense locker-room-style voiceover. Cue every sports cliché in the book.) The guy even stars in the video himself, just in case you were desperately wondering what Michael Jordan's real estate agent looked like: 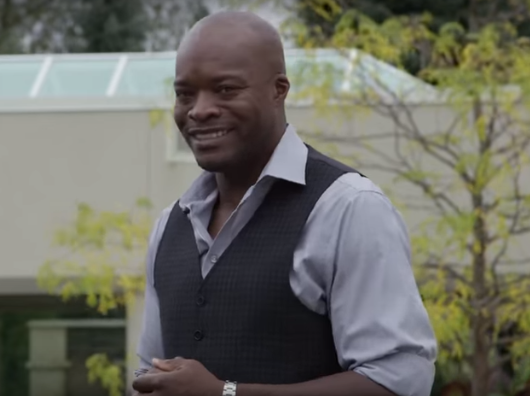 It goes on, calling the home "56,000 square feet of success," and that "only one person will be able to say, 'I just bought Michael Jordan's house!'" By the time the video concludes with a "Start your legend!" call-to-action, you might have to check to see if your eyes are still rolling in the back of your head.

On the flip side, once Nartey sells this puppy, he'll be the only person able to say: "I just sold Michael Jordan's house!"

The home is now currently available for $14.855 million, and yes, those numbers add up to 23, Jordan's old bball number.