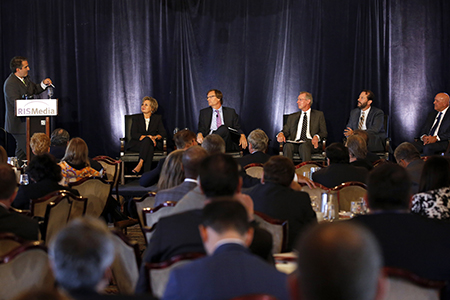 When it comes to growing in today’s recovering yet challenged real estate market, brokers are pulling out all the stops in order to set their firms up for continued growth as we head toward the future. While recruiting, retention, organic expansion, roll-ins and mergers and acquisitions still top the list of successful avenues of growth, brokers are continuing to expand their horizons by thinking outside the box.

While Schlott pointed to acquisitions as the main area of growth among the Randall Family of Companies over the last 10 years, attendees were provided a first-hand glimpse into other growth strategies that have led to success.

Kicking off the session, Chinowth explained that getting her firm to where it stands today was simply a matter of timing. “When we opened in 2004, there was a void in the Tulsa marketplace in terms of how properties were being marketed and branded,” said Chinowth, who went on to say that the firm opened its doors with 25 agents who were ready to capitalize on the fact that they now had a choice in the ever-expanding market.

For Elsea, who has seen continued growth throughout the company’s history, keeping the energy and culture of his company intact has proven to be a challenge, but one that he’s committed to facing head-on. “While we’ve continued to grow, we still maintain a family feel at our core,” said Elsea. “Our communication with our salespeople is personal, and we’re out in our offices every day, but it’s crucial that we continue to adjust the programs and services we offer to cater to what our salespeople want and need.”

Whether it’s catering to the needs of current salespeople or those they’re looking to recruit, Hunt believes the two factors that have ultimately played into his firm’s continue growth over the years are technology and strong client service ethos. “When it comes to recruiting, we try to tailor what we talk about around what we sense they need.”

And for Sposito, a majority of his firm’s growth has come from his involvement with various boards, committees and associations. “I didn’t get involved because I thought it would benefit the company,” said Sposito, “but it’s been an indirect benefit through both the state and national association.”

But perhaps the biggest takeaway for this year’s CEO Exchange attendees came when panelists shared with the intimate but impressive group of nearly 200 of the nation’s top brokers and industry leaders the one great, actionable item they’ve implemented into their business.

For Chinowth, who has tried her hand at many different types of recruiting over the years, sending out cards that incorporate ‘secret weapons’ of the various members of her team has been the most fruitful when it comes to bringing in new talent. Chinowth has also brought in a full-time coach to work with new recruits in order to get them up and running once they join the firm. 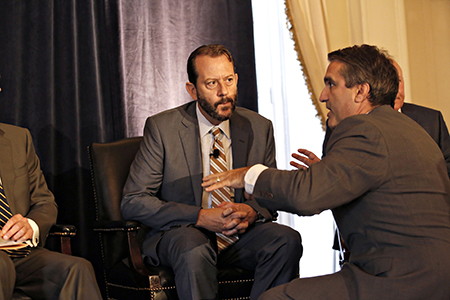 Panelist Mike Schlott, president, Randall Family of Companies, is all ears as moderator Joe Rand, managing partner, Better Homes and Gardens Rand Realty, kicks off "The Art of Growth: From Recruiting to Roll-ins" session on day 2 of RISMedia's CEO Exchange.

“We wanted to expand the size of our recruiting pie,” said Elsea, who not only instituted an apprentice program that pays agents a salary during an apprentice period, but is also proactive when it comes to reaching out to individuals who may not normally think of real estate as the career path for them. “We’ve also used Groupon and LivingSocial to sell discounted pre-license school coupons to the public, an effort that has been very well received.”

Having hired a full-time recruiter in 1989 who was responsible for putting an instructive marketing campaign in place, Hunt explained that direct mail was very good at getting people’s attention in the early ‘80s. As the times have changed, so too have Hunt’s recruiting efforts. In fact, looking at the process as a sale is the biggest factor in his recruiting efforts today. “Not only does this viewpoint provide a fundamental way to approach the process, we also meet with our business development managers and branch directors every Monday to keep track of their progress.”

It’s also important to take into consideration the fact that every manager has a different skillset and set of strengths. “We take the time to ask our managers how they like to recruit—as well as where their strengths lie—and then work with them to put a plan in place that plays to these areas,” said Schlott. “In the end, it’s all about selling the culture and believing in the product.”

Believing in the product from the inside out is an integral piece of Sposito’s recruiting process as well. “The more quality people I have working in my office, the more money they will make,” concluded Sposito, “and it’s my job to convince my agents of this so that they become my sphere of influence.”