If I were to ask you to name the toxins 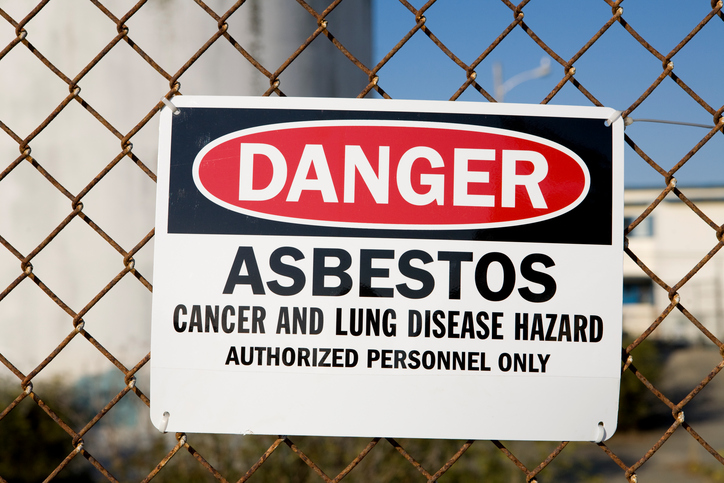 found inside your home, you’d probably give me a pretty long list of cleaning supplies, bathroom items and other products. They’re things we see every day and use on a fairly regular basis. But what about chemicals and toxins we don’t come into contact with while we’re cleaning the bathroom or trying to get rid of pests?

Asbestos is a natural mineral prized for its high durability and heat resistance, and was used during the construction of hundreds of thousands of homes, schools and other public buildings across the United States until the early 1970s. You could find the material in a variety of spots all over the house, from the shingles on your roof to the tiles on your floor to the furnace cement in your basement. If it created heat, there’s a chance asbestos made its way into those products at one point in time.

Today, strict EPA regulations limit the amount of asbestos included in newly-manufactured products, capping the amount at one percent. But the mineral still remains legal in the U.S. Those regulations also don’t do much for asbestos already included during your home’s construction. For a home built before 1970, asbestos may still be hiding somewhere, and even during any later renovations, asbestos in good condition most likely would have been left alone.

With that said, asbestos is considered relatively safe when left alone and intact. It’s when the asbestos-containing materials (ACMs) crumble and release fibers into the air that exposure occurs. Those exposed to asbestos breathe in or ingest the tiny fibers, which may settle into the lungs. Eventually, the fibers push into the lining of the lungs, where they can cause inflammation, irritation and tumors. All told, an estimated 10,000 people die each year in the United States from an asbestos-related disease, including between 2,000-3,000 from mesothelioma.

While there is technically no safe level of exposure to asbestos, generally the more time you spend around materials containing the mineral, the higher your chances will be of ingesting asbestos. Those who are diagnosed with an asbestos-related disease often don’t receive a great prognosis. In the case of mesothelioma, this is due in part to its long latency period, ranging from 10-50 years between exposure and diagnosis, and because the disease is often not identified until its later stages.

If we know asbestos is dangerous, then why hasn’t more been done to stop it? In reality, the fight to ban asbestos has been going on for decades. In 1989, the EPA issued a final rule phasing out the mineral in the U.S. after compiling tens of thousands of pages of research over the course of 10 years. Unfortunately, the Fifth Circuit Court of Appeals overturned the rule, citing a lack of evidence. The Toxic Substances Control Act’s (TSCA) own lofty goals prevented the EPA from banning asbestos despite the massive amount of information the agency gathered.

Following the ban’s reversal in 1991, the EPA didn’t attempt to reissue a final rule and left the current regulations that were in place prior to its 1989 ruling. The situation remained largely the same until last year, when Congress passed the bipartisan Frank R. Lautenberg Chemical Safety for the 21st Century Act, amending the TSCA and giving the agency the power to regulate chemicals more effectively with fewer barriers. It also required the EPA to begin a series of ongoing evaluations to determine the health risks of various chemicals to humans.

When the first 10 chemicals slated for evaluation were released, asbestos was included and the first steps were taken to, once again, see that asbestos is banned in the U.S. We’ve known for decades just how dangerous the mineral can be, but there are still a lot of hurdles that need to be jumped before we can celebrate. That includes possible challenges by industry lobbyists and proposed legislation aimed at reviving barriers removed last year.

We need a strong EPA to protect the environment and maintain public health. Asbestos may have had a place in our homes, public buildings and manufacturing for years, but the time has come to finally close this chapter and move on to safer and more environmentally friendly options.

How to Fix Most Common Cooling Problems in Your Home

How To Prepare Your Basement To Become a Downstairs Apartment