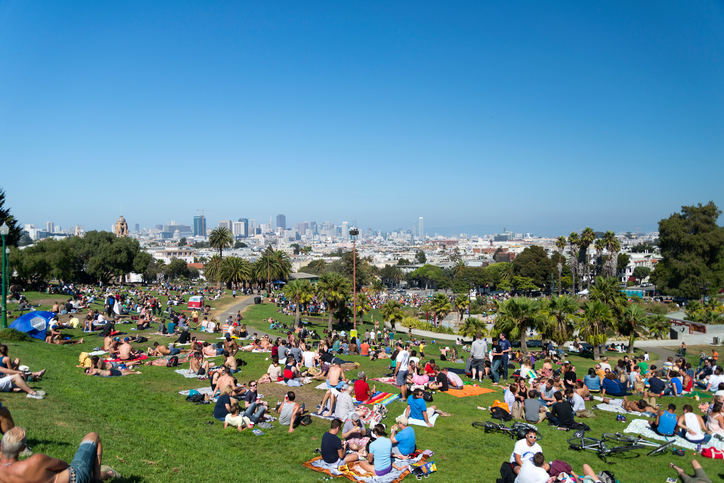 Back when the Spaniards still ran around trying to indoctrinate the Americas, Mission District was first baptized as Misión San Francisco de Asís. The date was 1776, and Father Francisco Palou had just surprised the unsuspecting Yelamu tribe. All the population work done by these Ohlone people for over two thousand years had dropped to 50 people by 1841. Cause of death? Slave labor. After almost 180 years of struggle, Mission District is San Francisco’s oldest neighborhood. But how did an old Catholic mission become the vibrant enclave it is today?

The groundwork for this bustling neighborhood was laid down by the Gold Rush. The influx in population, thanks to eager newcomers in search of riches, helped develop the area. By the time the rush was over, California was left with its first baseball stadium, known as Recreation Grounds. Presently, the stadium is part of Garfield Square. Additionally, a 1906 earthquake caused another population shift, reinforcing the steady flow of German and Italian immigrants as well as opening the flood gates for Polish families.

Today, the neighborhood is predominantly Latino. Yet, gentrification is attracting hipsters and scenesters alike. You can find them hanging out at bookstores like Dog Eared Books and Modern Times Books. With 75 internationally renowned pieces, the Precita Mural walking tour is one you can’t miss. If you’re a fan of film noir, you can also catch a 1940s flick or unreleased indie at the Roxie.

Mission District is filled with food joints. You can get famous San Franciscan burritos at Taquería Cancún, El Farolito, and El Castillito where tortillas are grilled before being wrapped around your favorite fillings. If you want food other than burritos—although I don’t see why you would—the crepe store Ti Couz and California-Southwestern fusion restaurant Val 21 are other good options.

When the sun goes down and your belly is full, your dancing feet will find their place at jazz venues like the Elbo Room. For the more electronic ear, Dr. Bombay’s is a sure bet. If you’re more into bars, the Make Out Room is the place to be, while Kilowatt is a quieter and more relaxed option. And don’t worry, the coffee culture is explosive and ever-changing, perfect to jolt up some energy when you’re trying to make the most of your visit after a long night out.