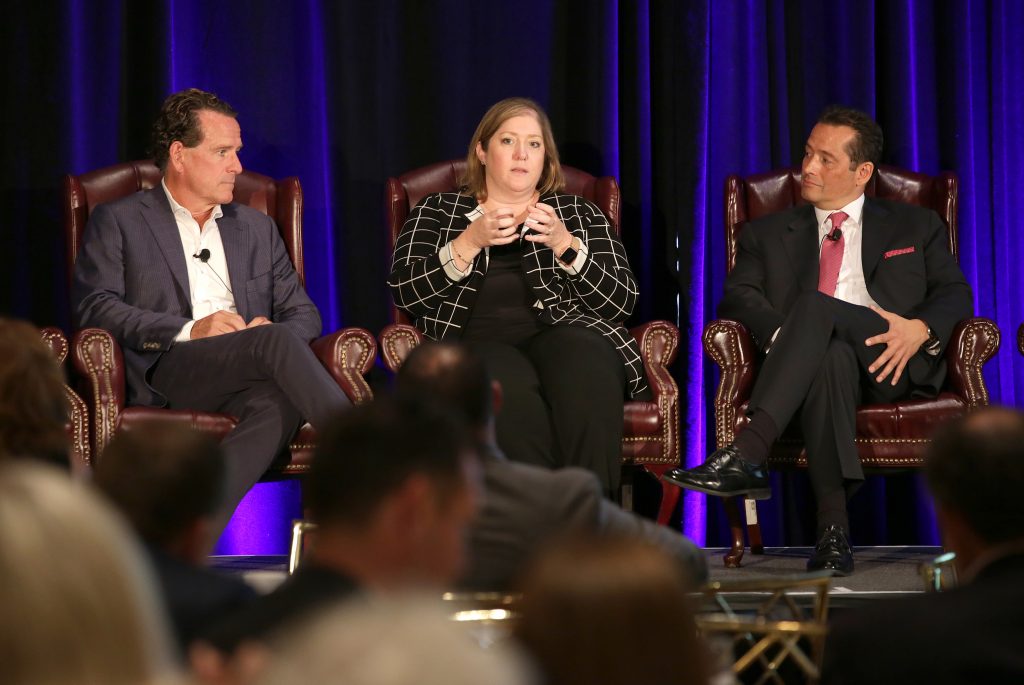 That’s the amount of times listing data may be entered through the course of one real estate transaction, estimates Upstream™ CEO Alex Lange. That’s 41 instances in which data may become incomplete or incorrect, posing a challenge difficult to surmount as technology advances.

The result for brokerages has been a classic (and chronic) case of “too many hands in the pot”—a game of telephone, becoming more and more inconsistent as it’s passed among portals, platforms and vendors.

The crux of the matter, according to Lange, is lack of control.

“Brokers over time feel they’ve lost control of where their data asset is going,” said Lange at RISMedia’s CEO Exchange, held at the Harvard Club of New York City on Sept. 13 and 14. The sold-out gathering, which brought together 250 of the nation’s leading real estate brokers and influencers, was marked by several noteworthy sessions, including an update from Lange on Upstream. The initiative, set into motion by The Realty Alliance and Leading Real Estate Companies of the World® (and later, others), is intended to reset the data infrastructure, assigning control back to brokers.

“[With Upstream, brokers] have the ability to not only pick the targets—who’s going to get the data—but they can also determine what data they get, and they can determine the frequency in which they get it,” Lange told attendees. “The brokers are in control.”

Related: RISMedia Exclusive: Real Estate Agents Weigh In – What Advice Do You Have for Upstream CEO Alex Lange?

Two of Upstream’s board members, Cary Sylvester and Mark McLaughlin, joined Lange in the update, offering perspective for brokerages small and large.

“Data is data. It should be stored once,” said Sylvester, vice president of Industry Development for Keller Williams Realty International. “Why are we competing for access to our own information?”

“Upstream will effectively be our ‘brain,’” said McLaughlin, CEO of Pacific Union International, recounting his technology team’s proposal for a similar system. “We control the distribution to everything, everywhere. It’s a fantastic new technology, and I can’t see any downside to it.”

The update addressed the prevailing misconception about the platform: is it a national MLS?

“Upstream is designed to work in conjunction with an MLS—it has almost no ability to ever try to be an MLS, and we specifically state we will never compete with an MLS,” emphasized Lange.

“We can all be on it. I can share a folder with Craig [Cheatham, member of Upstream’s Executive Committee], share a field with Cary, share multiple files across multiple entries, and rescind that permission at any time,” Lange added, likening the platform to Google Drive. “Upstream is just a platform—no one at Upstream can see the data, touch the data, or control the data.”

“The problem is that we need to get [the data] in one place and feed the entire ecosystem,” Sylvester explained. “Do we want to change the MLS structure today? No. How do we feed that ecosystem so that it can evolve and change? That’s what we’re looking for with Upstream, and why we’re so passionate about it.”

The initiative is gaining traction as it moves through development, with five MLSs and a sampling of brokerages currently piloting the platform. Lange anticipates transitioning out of the beta period in the first half of 2017, onboarding users gradually as development progresses.

Feedback from the industry has been encouraging, though not without questions.

“The reaction throughout our organization has been extremely positive and extremely supportive,” Sylvester said. “I get quite a few phone calls from brokers asking me, ‘When will it be in my market?’ Most are ready to make the switch.”

“Everyone’s appetite for this technology and the efficiencies it will create is very, very high,” said McLaughlin. “It will be a different experience in terms of data entry when we get our agents involved, but we’re looking forward to that challenge.”

“Use the Google Drive analogy as a lens to take any of the questions or concerns or thoughts you have in your office, and try to funnel it through that,” Lange told attendees.

“As competitors, we’ve all come together to solve one thing every one of us needs in our business,” McLaughlin added. “That’s the message to take back to your markets. Evangelize that message.”

What Makes Pinterest a Powerful Platform for Real Estate Marketing

4 Maintenance Tasks to Perform on Your Home Before You Sell