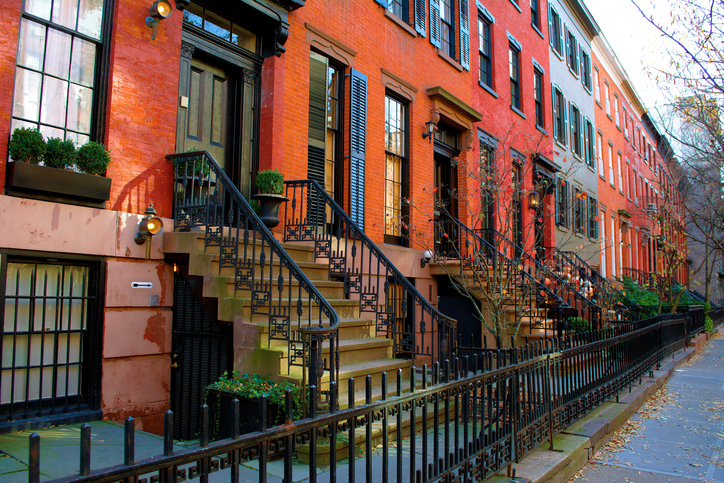 If—to quote Frank Sinatra—you want to wake up in a city that doesn’t sleep, you should obviously pack your bags and head to New York. Now, if you really want to be “king of the heap,” you need to be well-versed in Greenwich Village history. And thanks to this digestible recap, you will be ready to join the gang of "Friends" in no time.

So, let’s get started.

Once upon a time, in a land not yet known as Greenwich Village (more like Sapokanican), Native Americans lived a quaint life filled with camping and trout fishing. Of course, by the 1630s the Dutch settlers had arrived with their freed African slaves and “revamped” the area, transforming it into a giant farm. Things were going well in New Amsterdam, but the English showed up in 1664 and turned the pastureland into a country hamlet, and then a bunch of important British people took ownership of it and did other farm-related things.

Then finally it was 1790, and things started happening for the Village after surviving the Revolution. Thanks to the growing commercial activity along the Hudson River, the city became interested in purchasing the eight acres (designated to house a potter’s field and the public gallows—fun, I know) now known as Washington Square Park. Then the real excitement began: yellow fever and cholera broke out in the actual city…several times. Four times to be exact (1799, 1803, 1805, and 1821). This caused an immediate need to build temporary housing and bank offices in the Village. After an 1822 epidemic, however, many decided to stay.

That was Greenwich Village’s first bout of gentrification, as the neighborhood became the home of middle-class merchants and tradesmen. But it gets better. The city itself developed enormously. During the Empire Period, the wealthy took over the area surrounding Washington Square Park and erected the famous Stanford White marble arch in honor of George Washington himself in 1889. Writers like Henry James and Edith Warton would later immortalize the monument, and thus the Village itself, in their writing.

The Gilded Age, culminating in 1900, brought with it a swarm of French, Irish and Italian immigrants who brought with them Bohemian trends. Meanwhile, the highly fashionable moved upwards to Fifth Avenue and Central Park. Immigration continued, New York University grew, and the neighborhood started benefiting from art clubs, literary salons, libraries, private picture galleries, and learned societies. In came the hotels and the theaters which helped develop the shopping hub.

Eventually, German, Irish and Italian immigrants started making their way into the village, working for nearby warehouses, breweries, and coal and lumber yards. The result was older residences being turned into multiple-family dwellings, cheap hotels, or being demolished all together to accommodate for the influx in population. As the real estate value dropped, so did the decorous property owners who sold and fled uptown.

But who needs them anyways? The twentieth century found the Village transformed into a diverse and quaint hub. The bohemian vibe still stood strong, and the area became known for affordable rent and a safe space for eccentricities. If you ever want artists to start moving into your neighborhood, that’s the pitch. And in they came with their independent presses, their avant-garde art, and experimental theater plays, that ultimately became a hot spot for tourists. Not even Prohibition could stop this neighborhood now filled with “artistic flats,” as the area gave birth to the famous speakeasies.

Actually, the stock market crash of 1929 did bring construction to a halt. But it’s all good because art always saves us. Contemporary art, promoted by galleries and collectors during the 1930s kept the neighborhood afloat. Then came my favorite, the Beat Movement, the beacon of Bleecker Street. Here their artsy events known as “happenings” were hosted at the Judson Memorial Church. Homosexual communities found a home down Christopher Street, culminating in the 1969 confrontation known as Stonewall Rebellion, what many regard as the light that sparked the nationwide LGBTQ rights movement that is still ongoing. Greenwich Village also served as a platform for antiwar protesters in the 70s and the AIDS response in the 80s.

If you think about it, Greenwich Village is the embodiment of activism. And it’s always been full of cool people, from Henry James to Jack Kerouac to Edna St. Vincent Millay to Willem de Kooning to Julianne Moore. And while Allen Ginsberg did say he “saw the best minds of [his] generation destroyed by madness,” he also said to “follow your inner moonlight; don’t hide the madness.” What I’m trying to say is, everyone should go be mad at the Village at least once in their lives.

Think of it as an artsy form of yoga.