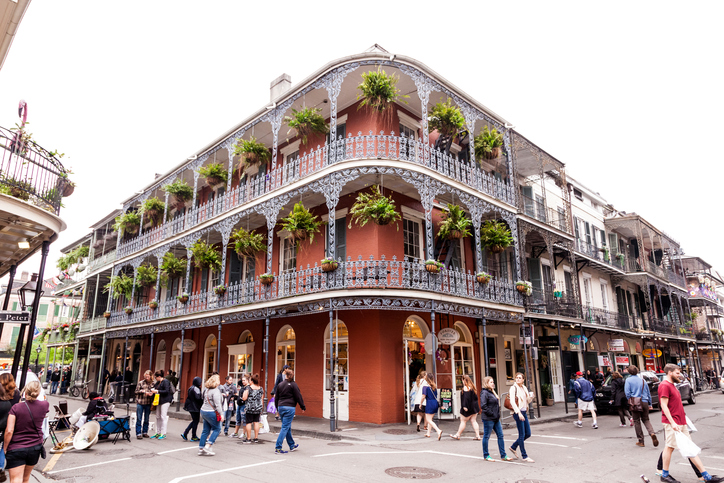 Historic neighborhoods are primarily venerated for preserving a certain look and feel of the past. However, most of the architecture within these neighborhoods are quite homogenous, exemplifying Edwardian, Victorian or Colonial styles. Yet, New Orleans’s French Quarter dared to embrace different influences during its youth, transforming this neighborhood into an oasis of Spanish, French, Creole, and American influences.

The Vieux Carré is first and foremost a visual extravaganza. The mesh of different styles makes it impossible for the passerby’s eyes to rest on any given space.  The biggest plus is that these edifices are just placeholders for the magic inside.

If you’re into carriage rides, Jackson Square is the place for you. Performers and artists will adorn your stroll as you get quality shots of St. Louis Cathedral and the Mississippi River. A picnic at Woldenberg Park will buy you some more Mississippi seconds with the steamboats crossing up and down the river. New Orleans’ famous Mardi Gras is also partly hosted at the Vieux Carré.

But how did this unlikely neighborhood come to be? In 1718, a French Canadian naval officer by the name of Jean Baptiste Bienville founded a military-style grid of seventy squares known today as the French Quarter. In those days, New Orleans was named after Regent Duc D’Orleans in an attempt to gain Court favor. Yet, this venture failed leaving behind only a deep-seated French Period legacy. Due to the African enslavement of the time and the tolerant atmosphere of the neighborhood, Creole culture was free to leave its mark on the area as well.

By 1762 Louis XV had grown tired of maintaining Louisiana and gifted it to his cousin Charles III of Spain. The Spanish rule lasted for forty years in which the French Quarter was bathed in olive oil cooking, paved with semi-fortified streetscapes, common-wall plastered brick houses, and walled courtyards that doubled as gardens and servants’ quarters.

The Louisiana Purchase of 1802 instated Louisiana as an American state. With it came an age of prosperity and 10,000 French and Haitian refugees. To finish it off, American, Irish and German immigrants also made it to the show, creating the true melting pot that is now the French Quarter.

Of course, New Orleans’ history is more expansive than this, but the point stands that the French Quarter is a must in travel checklists. Yes, there are plenty of tourist-like events to partake in and places to visit, but the Vieux Carré’s charm comes from being an open history book.