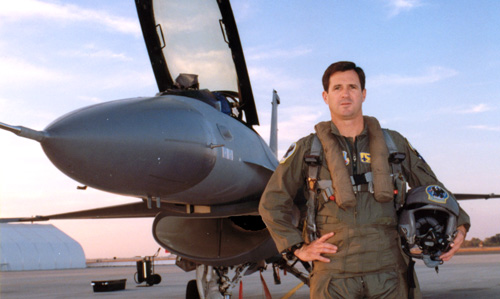 As a native New Yorker, the September 11 terrorist attack on the World Trade Center profoundly affected me. Over the years, all of us connected to New York City have continued to share stories of that horrific day, still trying to process, never able to forget. By now, though, I figured I had heard most if not all of the compelling recounts of 9/11.

During the recent NAR REALTOR Benefits® Partner Meeting, I had the good fortune to hear former F-16 United States Air Force Fighter Pilot Anthony “AB” Bourke share his experience of 9/11, a story that elicited both chills and awe, as if it had all just happened yesterday.

On the morning of Sept. 11, 2001, Bourke was heading home to California from Vermont, where he had been traveling for business. When he learned that his commercial flight, like all others that day, had been grounded due to a “catastrophe,” Bourke immediately called his base in California where he served as a reservist to see how he could help. He was told to head directly to the Air Force base coincidentally located at that same Vermont airport, where he was quickly put into duty as one of the first pilots to fly his F-16 over New York City in the homeland defense efforts on September 11.

Despite a commanding officer he had never met and a squadron he’d never flown with, Bourke took part in a briefing, and then turned to the training and systems he was versed in as a fighter pilot, which enabled him to step into a highly volatile situation and perform at the highest level. The memories he shared of flying over an abandoned, dust-cloud covered Manhattan, ready to take down any suspected threat, were mesmerizing and sobering.

Today, Bourke is the CEO and founder of Mach 2 Consulting, where he brings his training and expertise as a fighter pilot to the business world. During his presentation at the Partner Meeting, he focused on the importance of “debriefing,” a critical component of each and every mission flown.

After a mission, the squadron heads directly to the debrief, explained Bourke. “In the fighter squadron, the debrief is something we thrive on. I don’t care how good we think we are, no one has ever flown the perfect mission. Seventy to eighty percent of learning doesn’t happen in the cockpit—it happens in the debrief. The debrief is the most surefire way to accelerate excellence and drive better results.”

When put like that, it’s easy to understand why debriefing could be just as important in any business.

“In the business world, a debrief tends to have a pejorative connotation, but it’s not a performance review or a judgement of character,” said Bourke. “It is a sacred learning environment—a way to get a little bit better every day.”

Imagine the potential of making debriefing a standard practice in our respective businesses. The impact it could have on productivity and profitability could be staggering. However, in order for debriefing to be truly effective, there are strict rules that must be adhered to, says Bourke:

Interestingly, the debrief process works better in high-performance organizations, said Bourke. In other words, the more productive your team is, the more open they’ll be to debriefing as a strategy. No surprise, really, as those who are most successful are also most open to criticism and committed to constant improvement.

Bourke’s presentation also reminded me how important it is to learn from other industries and organizations. Don’t be myopic. Keep your eyes and your mind open—you never know where you’ll find an invaluable lesson.