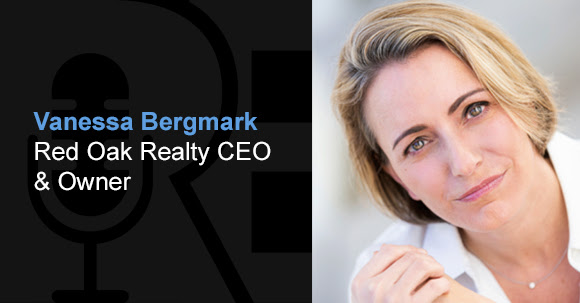 Vanessa Bergmark's entrepreneurial drive took root in childhood as she watched her father own and operate a pet crematorium in New York City. Cut to 2010 when she purchased Red Oak Realty from its four original male owners, and has since turned it into the largest independent real estate firm in the San Francisco Bay Area.

Listen to or view Episode 3: ‘Steering My Own Ship’ – Why Independence Gives You an Advantage

In this week's episode of RISMedia's RealEdge, Bergmark shares why success is all about resources and support, and why steering her own ship and remaining "seriously local" paid off big when crisis hit. As she says, "What you've built comes to fruition during times like this." Find out how Bergmark, a self-described person of action, is tackling urban flight, doubling down on resources, getting active in the community and keeping the momentum going.

On this week's episode you'll learn:
1:03 What it takes to be a female CEO in the Bay Area: "You will never put your feet up again!"
4:15 Getting started in real estate: "You're not selling houses, you're selling communities."
8:11 Leadership challenges during lockdown, and why chaos and uncertainty can be a gift
15:14 Truly understanding what it means to be essential and supporting the local community
18:09 The importance of collaboration, culture and your network
19:29 How the future will now be different and what the upsides are
22:22 The state of urban flight in the Bay Area…and will people come back?
28:40 The competitive edge of being independent
33:00 Building a sustainable offering for the future
35:48 Understanding the power of your network: "I did not get here alone."

About Vanessa Bergmark
Vanessa Bergmark is an East Coast native, born and raised in Brooklyn, N.Y., who has called Northern California's East Bay home for over two decades. After graduating from The Pennsylvania State University with a BS in Crime, Law and Justice, she headed West, living first in San Francisco and Marin Counties before settling permanently in the city of Oakland. She fell in love with real estate when she bought her first home, deciding to become an agent at a large real estate franchise and moving up to management soon after. In 2007, when one of Red Oak's owners called with an offer to run their intensely local company, she eagerly took the opportunity to run a personalized, independent and local brokerage, moving away from the franchise model. She took over the ownership of the business in 2010, and has grown Red Oak to second in market share in the East Bay cities it serves. She leads the company today as CEO where it continues to thrive, and spends a substantial amount of time touring the nation to speak about real estate and leadership within the industry. She is passionate about raising the bar while improving the customer experience locally.