Here’s a fun exercise. Pick a major city and start sorting the available home listings on the market by price, starting with the most expensive. Then, go one-by-one down the list, perusing the photos in each listing. See how long it takes for Harrison Ford to show up.

No, the Hollywood A-lister isn’t hiding in luxury real estate listings like some kind of Where’s Waldo-esque performance art. Just keep an eye on the large TV and home theater screens that inevitably pop-up in these kinds of residences. Not every listing will include them, but more often than not, you’re bound to come across plenty of Hollywood icons and classic films.

Inside this $35 million residence in Brentwood, Humphrey Bogart and Ingrid Bergman keep showing up in various rooms where “Casablanca” is apparently playing on an endless loop. That’s Leonardo DiCaprio from “The Great Gatsby” on the big screen in this $28.5 million mansion in Bel Air. This $12.5 million contemporary mansion in Santa Monica evokes “The Godfather” in a few of their images.

Eventually, however, he will emerge. Ford cuts an iconic profile as Indiana Jones, ready to whip this $7.5 million house in Tarzana onto the market. That’s Ford as Han Solo steadying his blaster inside a $6.4 million home in Encino. In Los Feliz, he’s back in action as Indiana Jones inside this $3.8 million home. 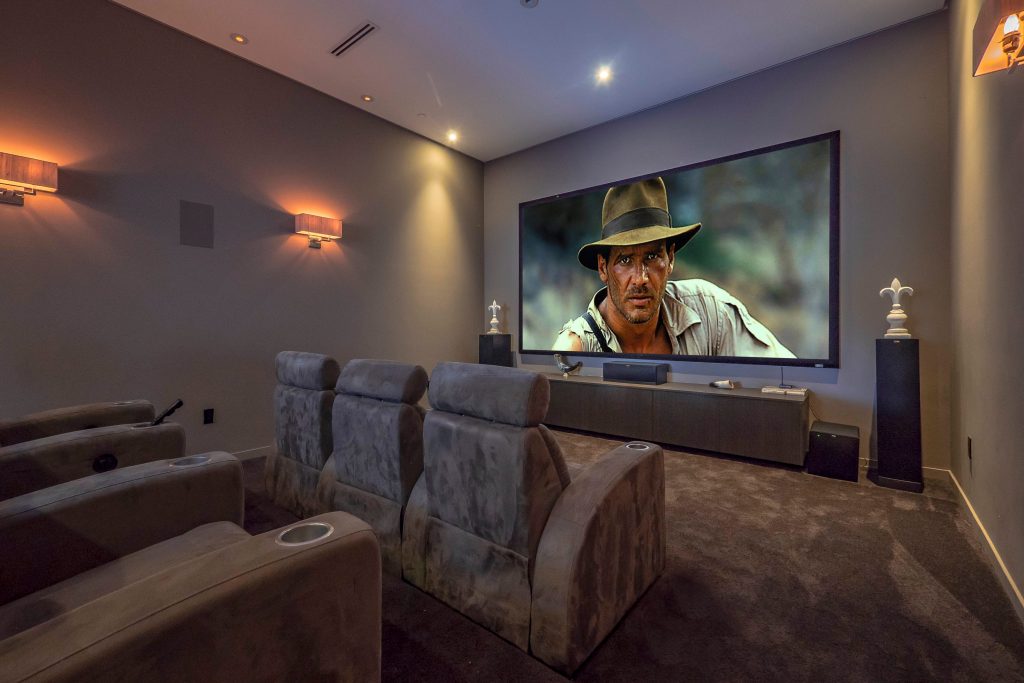 Whether it’s Ford, DiCaprio or Daniel Craig as James Bond, what is it about adding an image of these Hollywood stars on a TV screen in a random listing image that makes a difference for agents? When people are making million-dollar decisions, why even bother?

“You’ve got this big, black rectangle,” says Sotheby's International Realty agent Linda Bettencourt. “If you can take advantage of it and add some lifestyle feelings to it, that’s going to be useful.”

Bettencourt, who worked as a property stager for 18 years before becoming an agent, says that she once preferred prop TVs with “innocuous images of sunflowers or football games” when staging luxury homes. However, that didn’t provide the intended effect.

“What was interesting was that when you saw them in a photo, they looked like a picture hanging on the wall. It sort of flattens out the whole function and appeal of a television set, so we would have to find some other way to do it.” 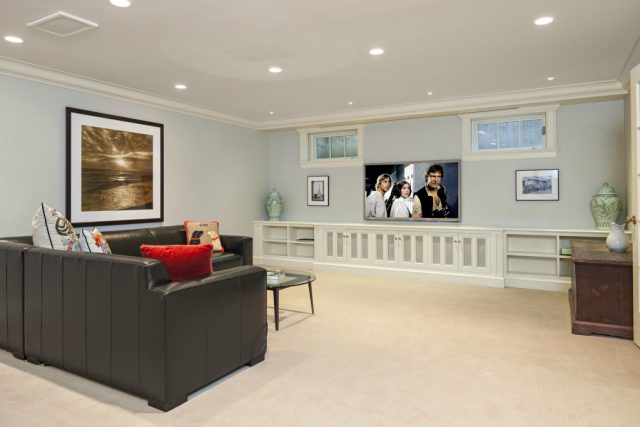 Enter Harrison Ford. Or, more broadly, the usage of screenshots from iconic movies such as “Star Wars” or “Roman Holiday” as well as the latest James Bond film. Sure, you will still see some flat-screen televisions or home theater screens with stock images of surfers, concerts or skylines, but there’s something about seeing a famous face staring back at you while scrolling that's impossible not to notice. It’s not just a visual reaction; it’s a visceral one, as well.

“What do ‘Gone with the Wind’, James Bond, Indiana Jones, and ‘Star Wars’ have in common? They are ubiquitous in evoking familiar feelings of adventure, romance and excitement—everything you want to feel at a great home,” says Senada Adzem, executive director of Luxury Sales at Douglas Elliman Real Estate. “Selection of those images is culturally and generationally influenced, and the actual images represent an important tool to target a particular psychographic profile of a buyer.”

Sure enough, depending on the type of buyer you’re targeting, agents seem to focus these images accordingly. The usage of classic films such as “Casablanca” and “Roman Holiday” speak not just to romantic notions, but also to a specific generation for whom those movies have an emotional resonance. However, as Adzem notes, this is not cross-generational imagery. 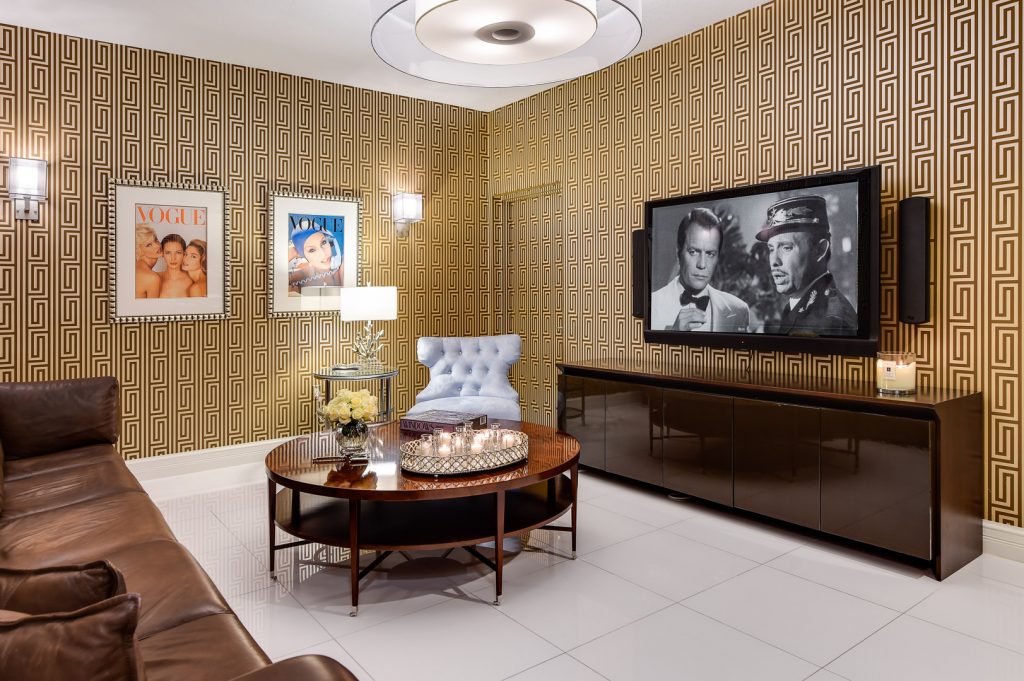 “Millennials could care less for Humphrey Bogart and classic movies, but they do love ‘Game of Thrones.’”

Demographics affect these images in different ways, as well. It’s not just about what kind of buyer agents are trying to attract, but also where in the country this particular home is located.

“In California, you’re not going to show images of an earthquake,” notes Bettencourt. “In San Francisco, you might use images from ‘Alcatraz’, ‘Bullitt’ or ‘Vertigo.’” Though, she does note that “Alcatraz” could be a questionable pick because you don’t want “something that’s going to create a mental conversation that’s distracting from the photo.”

All of which leads us back to Harrison Ford. Why did he become the patron saint of luxury real estate listing photo TV images and not, say, Tom Hanks, who is equally as popular in American pop culture, yet rarely shows up? According to Bettencourt, it’s about the kind of films these two actors make. 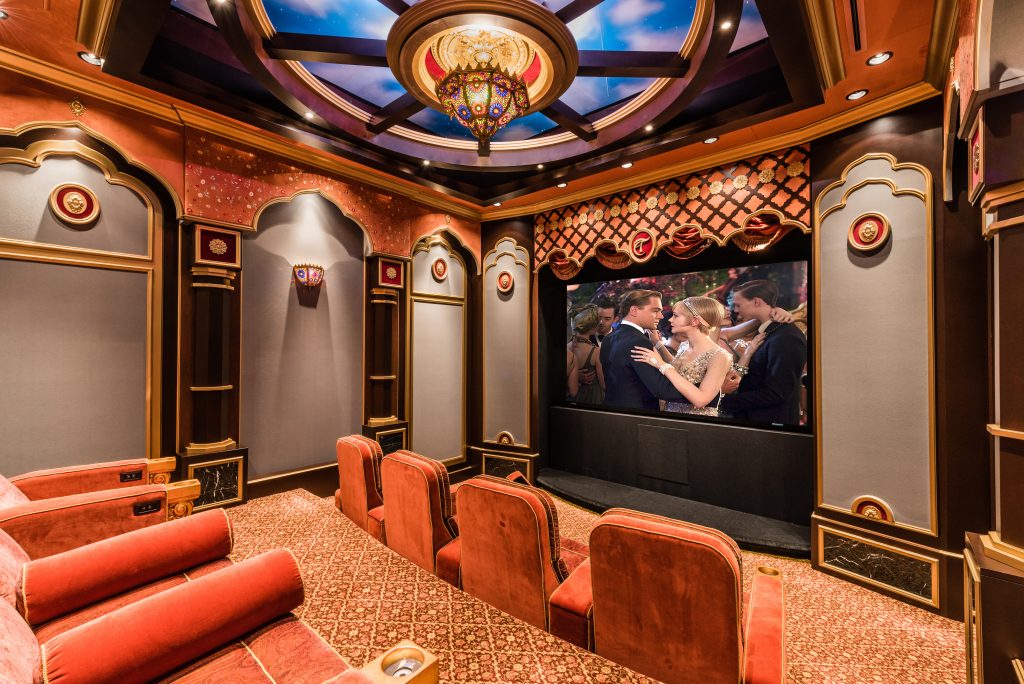 “Tom Hanks doesn’t do a lot of action movies. Who’s going to be inspired by 'Cast Away?' [Harrison Ford] speaks to a brand of adventure that is universally appealing. His films are usually very colorful. They have nice cinematography. You see a lot of him because his films are very recognizable, everybody likes him, and they’re feel-good films. They always have a good ending.”

This explanation also helps to make sense of the more curious examples of this technique you’ll come across. A random search might reveal luxury listings with images taken from films such as “The Three Amigos”, “Masterminds” and “First Knight” and leave you feeling confused by the randomness. However, when you realize it was more about highlighting Steve Martin, Zach Galifianakis, and Sean Connery, respectively, and what kind of emotional response they elicit, it makes a lot more sense.

Still, despite the fact that it was a hugely successful film, we’re going to draw a line at using an image from “Titanic” in your luxury listing. That just can’t possibly be a good omen. 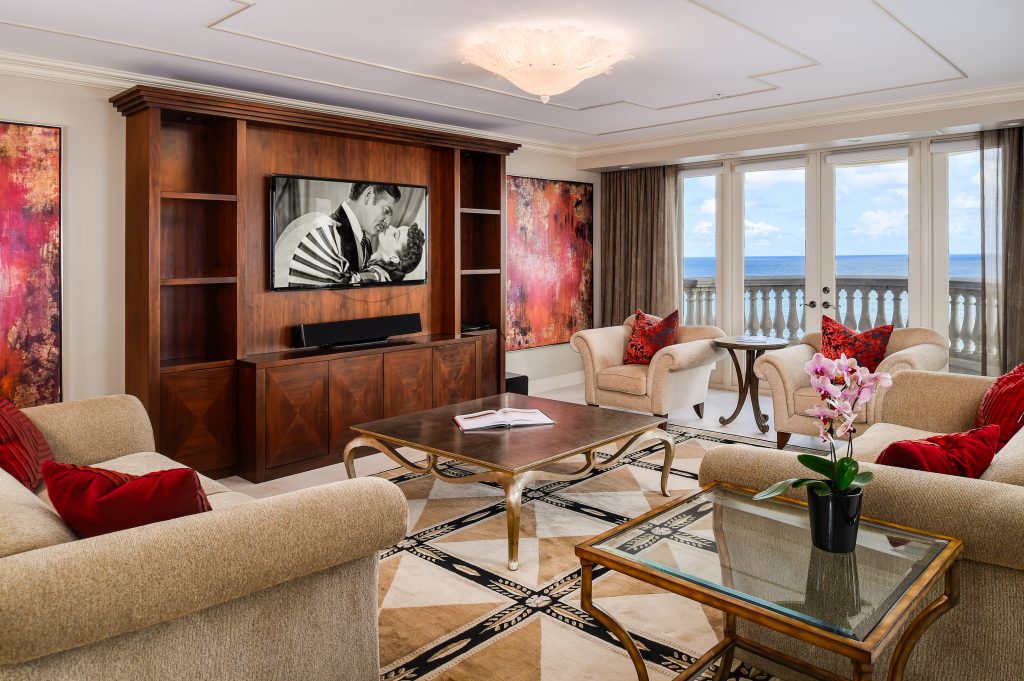 Is all of this legal under copyright law? That’s a good question that few agents can answer or want to dig too deeply into. Because of the limited scope of real estate listings, it’s not the kind of thing that is likely to catch the attention of a movie studio like Disney or Universal. However, Bettencourt notes that if your listing photo was used, for example, in a magazine ad or high-profile spread, that might put you in harm’s way.

“If Disney felt strongly about it, and it was in Architectural Digest, they would let you know.”

Just like in real life, it seems as though Ford’s days as the main attraction are numbered. Especially when it comes to the highest of high-end luxury listings, you’re more likely to see Leonardo DiCaprio, Daniel Craig and Ryan Gosling grace television screens these days. As times change and, more importantly, potential buyers change, it’s inevitable that the imagery used to entice them will change, as well.

Ultimately, as Bettencourt puts it, the best strategy is to use whatever evokes the intended emotional response

“We want someone to feel good about the space. [To think about] how ideal it would be to sit around with your friends and family and watch a great film. I think that’s what people are trying to capture when they choose those images on a screen.”

This piece was originally published by Neighborhoods.com.

Sean Keeley grew up in New Jersey, went to school in Upstate New York, lived in Los Angeles for eight years, followed it up with six years in the Pacific Northwest and now calls Chicago home. He's spent the better part of the last decade writing about real estate, neighborhoods and his beloved Syracuse Orange.

How to Protect Your Water Heater Against Winter Weather

How to Keep Your Septic Tank in Working Order