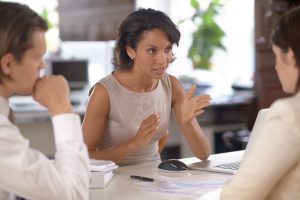 It’s no surprise that phone calls and emails fall short when it comes to closing a deal. That’s because body language accounts for 55 percent of a person’s signals throughout a conversation. The most successful agents know how to look and listen carefully, using non-verbal indicators to establish relationships and make sales.  So how can you use body language to close a deal? Here are some tips from my new book, "Close Deals Faster."

Mirror or match a person’s body language and voice.

When highly influential people communicate with others, they match everything from the other person’s tone of voice, hand gestures, buzzwords, acronyms and body language. Using this technique allows them to accomplish mirroring in a natural, unobtrusive way, quickly establishing uncommon rapport with little effort. This uncommon rapport happens subconsciously in the old brain of the prospect.

Learn the many ways a buyer’s body will communicate.

When a buyer is interested, their hands are relaxed, and their palms are open. They have good eye contact, and raise both eyebrows. Of course, the buyer will smile frequently, nod, and their arms are not crossed.

If a buyer is not ready to close the deal, their hands are in their pockets and they may be fidgeting or bringing a hand to the back of the neck. They avoid eye contact, and their arms are tense or crossed. It’s also likely that they’ll keep ample space between you, and could start tapping a foot.

Identify the buyer’s shift: The combination of the conversation and the buyer’s body language tells you when they’re ready.

The ability to recognize the buyer’s readiness to buy is the most critical principle of all. You need to watch and listen for the buyer’s shift—when the buyer changes their point of view and decides to go with your product or service. You will get some verbal signals (the conversation), but the shift is predominantly communicated by non-verbal signals. Often if you look and listen carefully, you will notice multiple buyer's shift signals occurring simultaneously. If you see a mismatch between what the buyer is saying and the signals from their body language, always believe the body language.

Some of the “buyer’s shift” signals include:

Closing is the weakest skill for salespeople in developed countries. In fact:

Male salespeople can sense from the dialogue that they are nearing the closing point, but since they can’t read body language very well, they are uncertain whether the buyer is ready to close or not. They know one thing for sure—if they try to close too early, it will turn the buyer off and kill the deal. So, they ask weak trial closes and use weak words like “feel,” “think,” “perhaps” and “maybe.” They beat around the bush hoping the buyer will close themselves, but 90 percent of buyers will not. Use body language to sense the shift and close the sale.

Silence is golden. Know when it’s time to stop talking.

We’ve already discussed in some detail how to read the buyer’s body language. When you are selling—especially at the closing stage—your own body language needs to be signaling all “green.” For example, you should not be sitting with your arms crossed in front of your chest. That body language sets up negative signals that can discourage the buyer.

After you ask for the business, it’s imperative that you say nothing until the buyer responds. Your body should be still. Any movement and fidgeting may distract the buyer. In my experience, it’s best to just sit back comfortably, smile and wait.

In most cases, buyers are not being silent as a negotiating technique. They are just analyzing, thinking, processing, considering and/or comparing. They may be comparing your offer to what others have offered. They may be considering whether or not they are ready to make the purchase. They may be thinking about a lot of things. And if you interrupt their thinking, they’re no longer thinking! In addition, when you interrupt a buyer’s thinking, you will come across as rude. Now there is literally a zero percent chance of making the sale.

These subtle steps can take you from a mediocre agent to someone who connects with buyers on a deeper level, and makes sales consistently. Don’t rely on phone calls and emails, and take advantage of the opportunities you’ll find in unspoken word.

John Asher, author of "Close Deals Faster," is the CEO of Asher Strategies, a high-level growth strategy consulting firm focused on improving sales for business-to-business companies. Asher is the No. 1-rated speaker on sales for Vistage, a worldwide network of CEOs. Over the last two decades, he has mentored a large cadre of speakers and trainers that has fueled the growth of Asher.