Everyone knows location is the most important part of real estate. You can't change where your house is (all things being equal). You have to consider school districts, crime rates, commute times—the list goes on and on. It can be much simpler when you're considering buying a home to compare apples to apples so you can see how the real estate market differs according to location, so HowMuch.net created a new visualization showing land and housing prices at a glance. 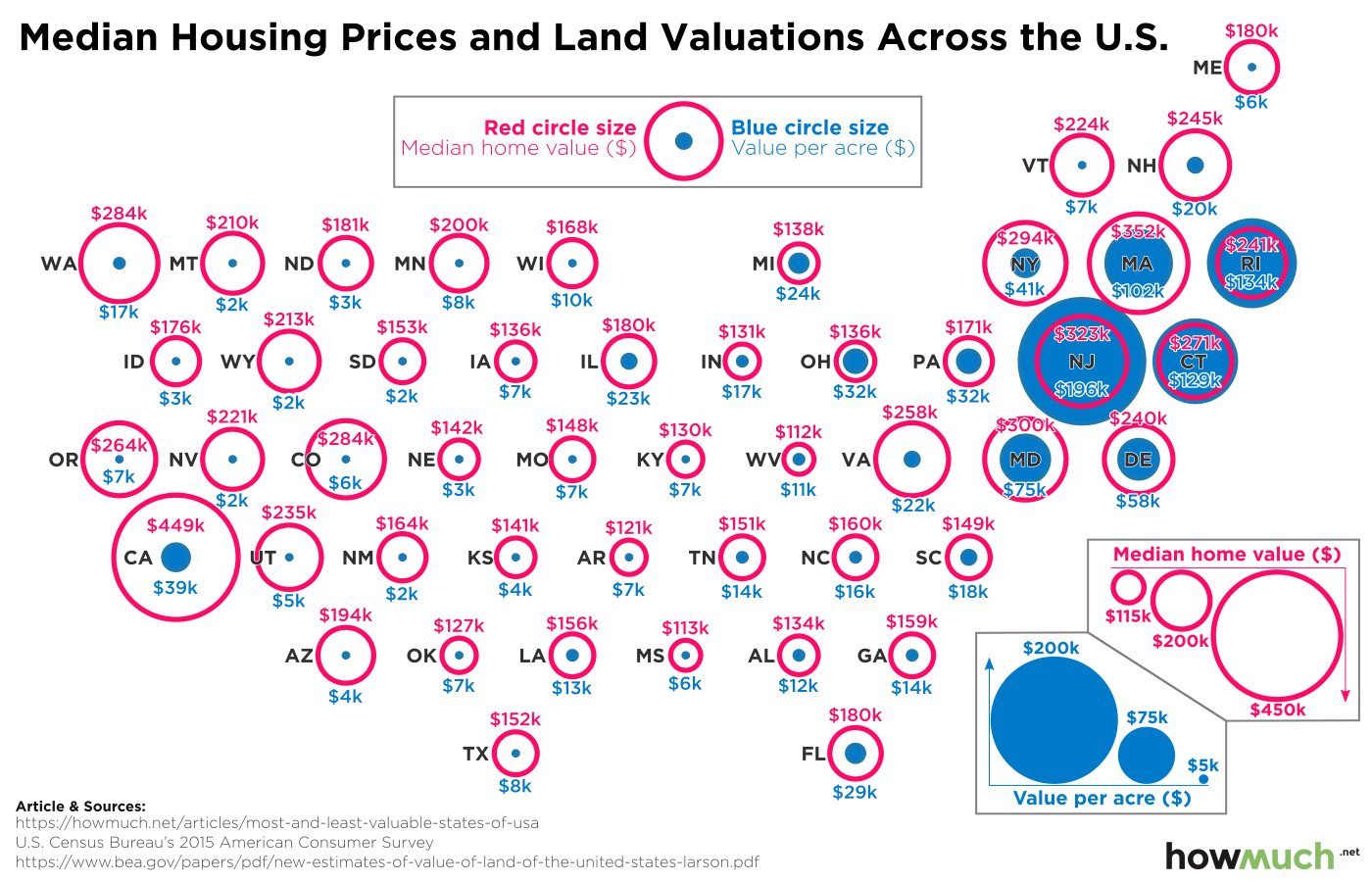 The blue dots represent the value of an acre of land, and the red circles indicate the median value of a home. The bigger the blue dot and the larger the red circle, the more expensive it is to become a property owner. Small circles and dots likewise indicate a very low cost of purchasing property. The home values are from the U.S. Census Bureau's 2015 American Consumer Survey, and the numbers behind the land values come from the Bureau of Economic Analysis.

Several things stand out in the illustration. An acre of land is much more valuable in the Northeast compared to any other part of the country. This is partly because the Eastern seaboard is a very densely populated area with several large cities, most notably New York. New York and Massachusetts have some of the oldest modern structures anywhere in the U.S. In other words, Eastern cities are a lot older than Midwestern cities, so there isn't a lot of farmland for suburban expansion anymore. In terms of geographic size, these are some of the smallest states in the country. As a matter of fact, the three states where the cost of an acre of land is greater than the median price of a house are all located on the East Coast, and they happen to be some of the smallest states in the Union (Rhode Island, Connecticut, and New Jersey).

There's a noticeable dip in both housing and land prices in Southern and Midwestern states. Prices slowly rise the further you move from east to west. This highlights unique economic developments over the last several years, including the boom in oil exploration in North Dakota and the growth of Western cities, like Denver, thanks to young people. Snowbirds also tend to move to Florida and Arizona when they retire, which also pushes up housing prices in those places.

Top 5 Most Expensive States to Buy a Home

All this shows that the laws of supply and demand are alive and well in the real estate market. You can easily find cheap acres of land where they are plentiful and un-useful (sorry, Nevada), but owning property is a lot more expensive in smaller places crowded with lots of people. As always: location, location, location.

A version of this article originally appeared on HowMuch.net.