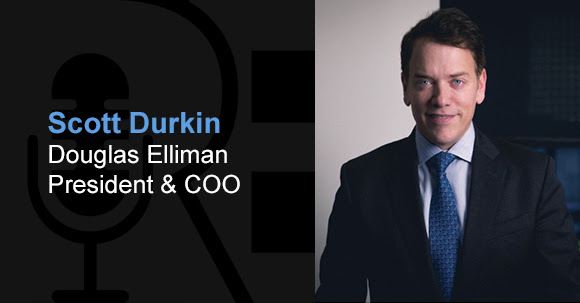 From dance to hotel management to real estate, Scott Durkin's journey has been anything but boring. Beginning with an interview with future mentor Barbara Corcoran (during which she sat in his lap) and leading all the way to his current role as president and COO of the nation's No. 2 independent real estate firm, Durkin's resume now includes navigating the COVID-19 pandemic at ground zero: New York City.

Listen to or view Episode 4: 'Don't Tell a New Yorker What to Do' - New Strategies for Urban Markets

In this week's episode of RISMedia's RealEdge podcast, Durkin discusses how the pandemic has impacted the Big Apple, why the rumors of a mass exodus are greatly exaggerated, and how savvy agents understand that to get business done in a changing landscape, they'd better be part of the change. He also shares his advice for urban real estate leaders everywhere ("get out from behind the desk"), the surprising upsides of doing business in the current market, as well as a couple of memorable anecdotes about master marketer, Corcoran.

On this week's episode you'll learn:
1:10 The void in real estate that revealed his path to success
2:15 What it's like to interview with and work for Barbara Corcoran, including her ‘unteachable gift’
6:20 The secrets to growing a firm to 110 offices, 6,500 agents and a No. 2 ranking while preserving its DNA
8:18 How COVID 19 changed New York City, and the truth behind the reported 'mass exodus'
10:15 New strategies for marketing listings in the city and building a digital plan
13:39 Equipping agents for COVID times—going from transactional to advisory
17:22 Lessons learned—how to get business done during a 'hiccup'
19:40 The silver linings: No more 'static and noise.'
21:25 New pandemic initiatives: staging, photography, videos and drones
23:47 Advice for urban real estate professionals: 'Take a breath and be present.'

Douglas Elliman President and Chief Operating Officer Scott Durkin has been an industry leader for nearly three decades and is a driving force behind the globally recognized brokerage's ranking as the second largest independent residential real estate firm in the United States.

Scott's meteoric rise at the New York City-based firm began when he was hired as executive vice president in January 2016 as part of the company's effort to grow a nationwide presence. He was quickly promoted to chief operating officer in October 2016 and president in December 2017.

From the outset, Durkin has helped oversee expansion efforts in New York, South Florida, California, Massachusetts and Texas, as well as restructured operations in Westchester, Connecticut and the Hamptons. He has also led the development of a more streamlined and strategic operations team, bringing together top-tier talent across a range of disciplines including public relations, marketing and technology.

Previously, Durkin enjoyed a 26-year tenure at The Corcoran Group, where he was a protégé of Barbara Corcoran. He quickly earned a number of esteemed titles, including chief operating officer and senior managing director of the Chelsea Flatiron office, which ranked among the company's top 10 locations nationwide during his 11 years of leadership. Highly involved in several key milestones for The Corcoran Group, from selling the business to NRT/Realogy to acquiring subsequent brokerages in New York and Florida, Durkin solidified his reputation as a formidable leader in the real estate industry.

Newsmaker Spotlight: Kathryn Redican on Being Prepared for Any Market Shift

RealEdge Podcast Ep. 18: ‘You’ve Got to Be Able to Tell Your Story’ With Dan Forsman