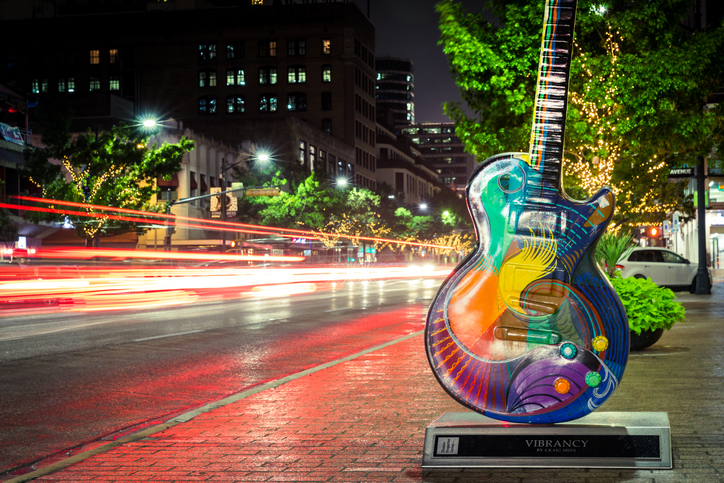 How many blocks make up a neighborhood? In Clarksville’s case: nine. But don’t let the fun-sized specs fool you. This tiny Austin neighborhood has a lot of stories to tell.

Clarksville might be known for its lively bars and restaurants, but its dark days aren’t far behind it. The neighborhood was born at a highly optimistic time, established in the 1800s as the first freedman’s community west of the Mississippi. It soon became a popular destination for freed African-American slaves looking for a better education system and infrastructure, but the arrival of “Negro Districts” in the late 1920s set Clarksville in a downward spiral.

Instead of a hub for hardworking men and women, Clarksville became a prison. As a negro district, its inhabitants weren’t allowed to buy land outside of it. While this law alone was already stunting Clarksville’s growth, the real problem began when the white population of Austin continued to grow, finding the need to occupy the Clarksville area.

To push black residents out of Clarksville, funding was cut and schools were shut down. Highway constructions and gentrification have continued to threaten the African-American community overtime. Yet, while many families have been displaced, the community persists.

Endurance and resourcefulness remain centric in present-day Clarksville. A great example is Waterloo Records, which first opened its doors in 1982 and still run a profitable business selling records and hosting free shows. They even still uphold their “Listen in Store” and “Ten Day Return” policies.

The HOPE Outdoor Gallery is Austin’s equivalent of New York City’s now-defunct 5 Pointz, an abandoned condo now covered in graffiti art. BookPeople is a popular destination for bookworms and writers thanks to their large selection of books and impressive repertoire of reading and signing events. Finally, if you’re looking for a picnic area, head over to Clarksville Park.

The food and drink department is most important, of course, and Clarksville doesn’t fall short in this area. For the best queso, they recommend El Arroyo. If one of your dreams involves going to a fully-stocked bar that also happens to sell barbecue, Mean Eyed Cat, named after a Johnny Cash song, is the place for you. Tacos and Tequila offers exactly what their name promises. And if you’re honestly only looking for a drink? Go to the Tiniest Bar in Texas.

Now, I know this won’t sound too enticing…but maybe you’d like to take a trip to Whole Foods. Why? Because it started right here in Clarksville, back then known as the “Clarksville Natural Grocery.” This one has live music, a wine bar, and a rooftop playground.