As the challenges facing the real estate industry continue to increase in volume as we move toward the future, being backed by a strong National Association of REALTORS® (NAR) is paramount to setting both the industry—and its practitioners—on a clear path to success.

"Our biggest challenge is that we're perceived as being in an ivory tower," said NAR CEO Bob Goldberg during RISMedia's 2017 Real Estate CEO Exchange Networking Luncheon. 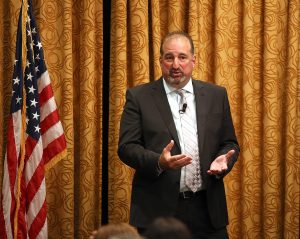 A widely held misconception that according to Goldberg is often perceived as reality, Goldberg took to the stage to portray a different NAR—one with a focus on becoming a more proactive organization that takes the time to listen to its members and engage.

"I'm tired of listening to why we're going to get defeated," said Goldberg of the rapidly changing industry. "We can't sit around and wait to see what will happen. We have to change now. We need to make it happen."

Tackling challenges head-on tops the list for Goldberg and his team as they help make change happen by taking the time to talk to members, attend events and listen to what's out there.

"We're all fearful of disruptors," said Goldberg, "but we have to be the ones to help disrupt ourselves. We have to be fearless when looking at what's happening, and embrace the change we see."

While NAR's strategy in the past consisted of keeping major players out of their sandbox—forcing them to create their own—the organization's focus path forward will revolve around proactively going out and mentoring/advising those who have their minds set on coming into the industry. "We can no longer close our eyes, not look at them and believe they won't think of us," noted Goldberg, who is fully committed to exploring different ways of bringing everyone under the tent that is organized real estate.

"NAR doesn't sit at the top of the pyramid," said Goldberg. "But how do we flip the pyramid the other way around so that we're all in this together?"

Working together for the betterment of the industry, NAR will also continue to expand its influence on Capitol Hill, lobbying on behalf of each and every one of its members.

"Our team wants to be responsive and listen to key issues, making sure we help clear the path for all of you to be successful and more profitable," concluded Goldberg.

Stay tuned to RISMedia for continuing coverage of this year's CEO Exchange sessions: