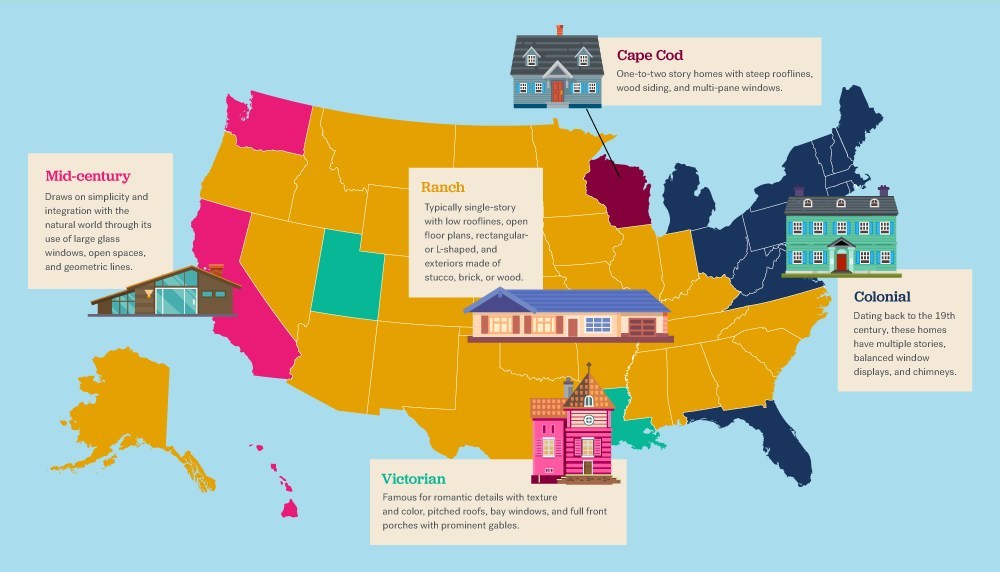 Home styles run the gamut from traditional Colonial to Mid-Century Modern. But which is the most popular? Craftsman homes, according to a recent Harris Poll conducted for Trulia that surveyed over 2,000 Americans over the age of 18. The winner was voted in by 43 percent of respondents, with ranch-style homes as the runner-up at 41 percent, followed by Colonials at 36 percent.

So, where can Craftsman-style homes be found? That's the tricky part—they're pretty scarce in the overall home landscape.

According to Trulia's search algorithm for style keywords, the following homes are the most common:

And with each style comes a unique decor feel. According to Trulia, Colonials call for dramatic paint colors; ranch homes require neutral tones and simple furniture; and Cape Cod-style homes should be highlighted through beautiful curb appeal with large planters and floral boxes. Victorian homes call for dark baseboards with modern wallpaper on accent walls, and Mid-Century-style homes work well with white paint and furniture with period elements like tapered legs.

"Each architectural style across the country adds character and charm to a neighborhood, making each one unique," says Lynnette Bruno, Trulia's vice president of Communications and Research. "These decorating tips from the Trulia Design Panel help you bring character from the outside in so you can transform your space into a home where you'll love to live."

Why You Should Never Ignore a Leaking Roof