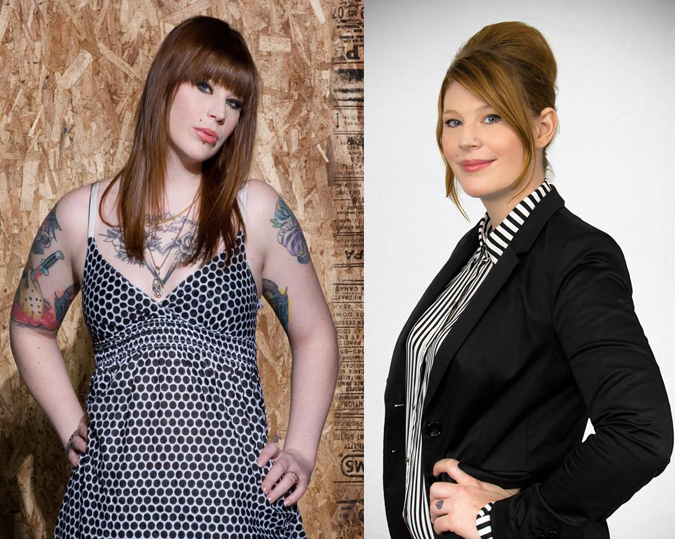 Real estate is a 24/7 job that requires agents to be on-the-go and on their toes. Thanks to time-crunched showing schedules, marketing to-dos, listing presentations, and more, some might say that agents are rock stars. But in some cases…they’re actually metal stars.

Meet Mercedes Lander, a real estate sales representative with RE/MAX Centre City Realty in London, Ontario, Canada. Lander is the drummer for Kittie, a metal band who broke out in 1999 with a brazen single called “Brackish.” Their debut album, “Spit,” hit Gold, selling over 1,250,000 albums worldwide. High on the album’s success, Kittie toured the world and notably reached Buzzworthy status on MTV.

So how did Lander land in real estate? Changes in consumer behavior and in the industry itself left her on the lookout for other opportunities, including the pursuit of a much-loved hobby. Now, when she’s not banging on the drums and bursting fans’ eardrums live, she’s showing homes, nurturing client relationships, and selling real estate in a city she’s grown to love over the last two decades.

Here, Housecall talks to Lander to discover just how a metal musician ends up in real estate, what she does to market her business, and what’s on tap for her band’s future.

Nick Caruso: When did you start in real estate and how did it come about?

Mercedes Lander: I’ve been very interested in real estate for quite some time. I flip houses and it’s something that I’ve always been into since I bought my first house when I was 23 years old. I’ve always gravitated towards it. I’m handy, I fix stuff by myself, for the most part, and can pretty much do anything except electrical. When things with Kittie started to slow down in 2012 after we finished our tour, we decided to take a little bit of a break. I decided that I was going to pursue getting my license because then I’d be cutting out the middle man and earning a commission when I sold. Of course, I’m a huge real estate troll. There wasn’t a day that went by where I wasn’t on the MLS looking. In London, Ontario, the housing market is quite strong and has been for quite awhile. It was a no-brainer for me to be honest.

NC: What aspects of your job do you like the most?

ML: Every day is an adventure – much like being on tour. You get to go into strange houses and see things that you wouldn’t normally see. You get to look into other people’s lives, which is quite interesting. You never know what you’re going to find. In addition, you get the satisfaction of helping people achieve their goals. If Client X wants to buy a house, they may not be ready, but you can hook them up with a financial adviser who’s going to help them or at least tell them what to do to fix their credit. There are a lot of parallels between music and real estate. You’re helping people - in a different way, but all the same.

NC: What is the reaction when clients find out you’re in a metal band?

ML: I’ve had clients Google me and when they realize [my background], it’s either really bad or really good. There’s no such thing as in between. I had an older Irish couple in their 70’s that I worked with at one of my previous brokerages. I listed their house and I think they Googled me because they hated me after that. My past is on the Internet. It’s readily available. It can be a blessing sometimes…or not.

NC: Is there any particular reason you joined the RE/MAX brand?

ML: Around the time when news had first gotten out on the Internet that I was doing real estate for a living, I felt like I didn’t want to do it anymore. All of the metal magazines were posting about it. They honestly have absolutely no idea what the music industry is like if this is news. I took a good chunk of time off when my friend who sold me my first house [a former bass tech for Kittie], and had been in the business for a while, set up a meeting for me with the broker at RE/MAX Centre City. We sat and talked. Out of the box, three months in, I had six deals under my belt. I believe that he thought I was a big asset. I think the brand name RE/MAX is synonymous with real estate. It’s a big helper. Their production is through the roof and they sell quite a bit of real estate in town.

NC: What are some of the best ways you market your real estate business?

ML: The city that we live in is too much of an urban sprawl to focus on the entire city. The neighborhood I work is the Old East Village, and it’s very active. I am well known in town from the band. Capitalizing on that is paramount. I do have a very wide circle of friends who are going to be buying houses or are just starting families, so for me, making sure that my clients I’m working with are happy enough to refer me is important. This is a referral based business. It was born and bred on referrals. Your best weapon is somebody who’s going to champion your business and tell their friends how great you are.

I do a lot of online marketing. I also give people handwritten notes or mail them a nice card. If I see someone I worked with on the street or if I have dinner with a client, they get a card and I pop a couple business cards in it. People really gravitate towards that. Treating your clients the best you possibly can is crucial so that when they have a friend selling…

NC: What are some of the most unique aspects of the London, Ontario market?

ML: I’ve been here for 20 years. I love the architecture of the older parts of town. We have grand, beautiful Victorian homes here, and we have a great heritage district. The city was founded in 1826. In my neighborhood, one of the oldest houses was built in 1852 – it’s for sale right now! As a lover of old architecture and the finite detail that went into building those houses, I love the way the Old East Village looks. I love the way downtown looks. There are so many grand, stately homes that are just beautiful.

NC: Kittie raised double its target goal on its IndieGoGo campaign for the 20th anniversary documentary and book. How those projects are coming along?

ML: It’s my labor of love. We’ve been putting things together and having weekly conversations with Marc Eglinton and David Brodsky for the documentary aspect of it. We’re waiting on MuchMusic – they have a lot of great old archive footage. As soon as that happens, David has the rest of the footage. After that, we’re on our way with the documentary. It’s been a little bit of a process, but we’re still right on target.

It’s been a grand undertaking for sure, but it’s something that we need to do. I think it’s important. There are so many things we never really talked about – things people really don’t know or haven’t learned about the band. There’s so much speculation around the history of the band that people are unaware of. Our goal is to clear it up. The documentary is going to be more lighthearted and fun. We’re going to hang out and have already planned to do the commentary for the DVD. I think more than anything, this is just going to be very interesting. It’ll change the outlook of the band. The biography is going to be more in depth, delving a little deeper into these topics.

NC: What does the future look like for Kittie?

ML: What we’ve kind of planned on doing is a remix and remastering of our catalog to be released probably sometime in mid-2015, depending on when our label gets in gear. Other than that, we’re obviously going to do a press tour for the book and the DVD. People should at least expect live shows sometime 2016.

NC: What are you listening to these days? Do you have any guilty pleasures?

ML: I readily admit I have a very large collection of 90’s R&B music, but I have always admitted that so it’s not really a guilty pleasure! I’ve been gravitating, especially the last few years, toward Classic Rock more than anything, just kind of reminding myself how good music was back then in the 60’s and 70’s. Records from the 70’s just crush modern-day production. The amount of detail that went into them is just astounding. Rock music in general now is just boring. This might not be the best example, but listen to The Guess Who. Go listen to the amount of production that went into those songs - all the thousands of layers of music. I always enjoy reminding myself of how great music was back then.

Nick Caruso is RISMedia’s Senior Editor. When he's not writing about real estate, he's blogging about music and attending live shows in the smallest, darkest and dingiest rock clubs he can find.

Rocking in the New Year Recap: New Leads vs. Database