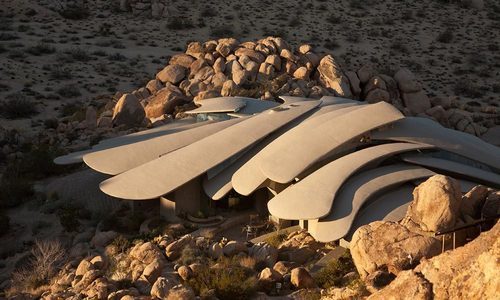 The listing for this house certainly isn’t modest. It calls this estate: “the most important architectural house you may have never seen.” So it’s really important, gentle readers. Really important. Because they say so.

This Joshua Tree, Calif. pad is fitting for Jaws, Francisco Scaramanga, Goldfinger or Insert Another James Bond Villain Here, because look at the place! It looks like it’s on the edge of a cliff in the middle of nowhere, perfect for weapons of mass destruction (fictional ones, of course) and some sneaky do-bad-ery. Even Dr. Evil would surely approve.

This is actually the first time ever that this lair is up for grabs. In the late ‘80s, artist Beverly Doolittle and her husband decided to build on their already-owned 10 acre property. Architect Kendrick Bangs Kellogg was brought in to create the super unique structure for Doolittle, beginning his work in 1988. The home is constructed of concrete, steel, glass and copper, and is placed directly on top of the naturally rocky site.  Curbed says it looks like a ribcage from the top…let’s just go with that. 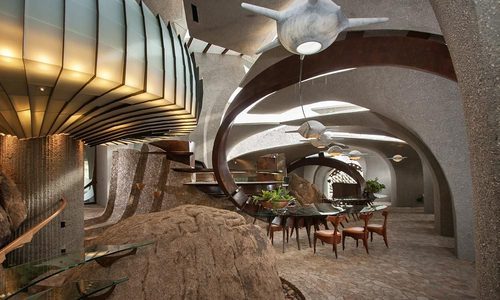 The house was completed in 1993, though interior decorating continued for several years after. The Doolittles didn’t move in until the early 2000s, but have already decided to downsize. Riiiight.

Their loss is your gain! It could all be yours for a cool $3 million.

Nick Caruso is RISMedia's Senior Editor. His favorite James Bond movie is "You Only Live Twice."