There are many odd holidays that pass us by during the year without us ever realizing it. One example is National Good Neighbor Day, which took place on September 28 and was created in 2003 to honor all the good neighbors out there. However, with the holiday firmly in our rearview mirror, it's time to recognize those on the other end of the spectrum: the most annoying neighbors in America.

ImproveNet—an online home improvement resource—recently surveyed 2,500 people across two dozen U.S. cities on the topic of their neighbors. The site's analysis focused on three main factors: overall frustrations levels, 36 of the most common annoyances and the natural transgression that is confrontation.

What did ImproveNet find? Dallas, Miami and Austin have the most annoying neighbors in the U.S., with overall loudness being the main annoyance. Loud music, loud voices and loud parties were the three most popular responses for what annoys us most about our neighbors.

An interesting trend that arose from the study is that cooler (literally) heads prevail. Of the top five least annoying cities in the U.S., four are in the North, while four of the five most annoying cities are in hotter, southern climates.

Below is a full list of the 24 cities polled, from most to least annoying, according to respondents. For lists of what annoys us most about our neighbors and which cities have the most confrontational neighbors, visit ImproveNet. 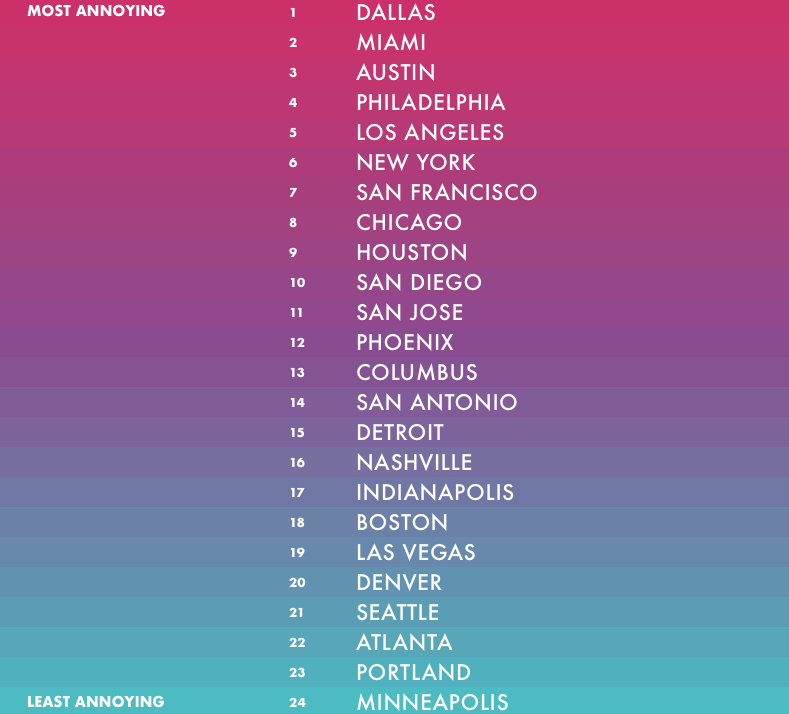